The strategy of the project is very simple: a modular flexible structure spans between existing buildings, supporting the mixed use program, while freeing the space below for public use. The axonometric shown below shows this rich public realm that the offers back to the city.

With this modular structure, units can be added or even dismounted from the structure as demands on the building change over time, and can adapt to either office space or residential parameters as desired. Green terraces on higher levels provide the possibility of an apartment with a garden in the heart of urban Rotterdam. 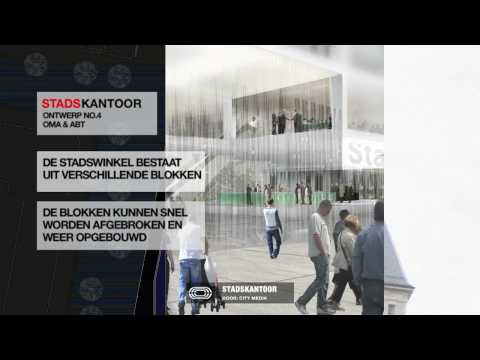 For this project OMA worked with Werner Sobek and engineers ABT. Besides this particular structure, the building has a climate regulated by warm air stored in summer and released in winter, and vice versa, and the use of hi-tech translucent insulation in the building’s glass façade, addressing the main requirement for this building: to be the most sustainable building in the Netherlands.

“Rather than posing as the city’s next superlative, the design for the Stadskantoor is partly a building, partly an urban condition – a skyline in its own right. The design attempts to mediate between the adjacent town hall, post office and Stadstimmerhuis. Through an intentional ambiguity, the mass immerses itself in the city’s diverse architectural periods, absorbing the scales and styles of its immediate context.” – Reinier de Graaf

The project is led by Reinier de Graaf and Rem Koolhaas.