Hungary inveiled the design for their pavillion for next year’s Shanghai World Expo, designed by Tamás Lévai. Gömböc, as a hungarian invention, is the central element of the exhibition, a two meter high solid plexiglass moving object.

What is Gömböc (pronounced as ‘goemboets‘)? ‘Gömböc’ is the first known homogenous object with one stable and one unstable equilibrium point, thus with two equilibria altogether on a horizontal surface. It can be proven that no object with less than two equilibria exists. The discovery of the inaccessible path has led to the idea of GÖMBÖC. The pavilion as wood is intended to represent this path, and since it is of immaterial nature, we are trying to evoke it with non materials: empty space, light and sounds.

GÖMBÖC, as a distinguished pebble analogy, helps to understand empty space and to recognize its uniqueness and greatness. In order to represent it in architecture, we had to combine features that are used by both mathematics and architecture: homogeneity, abstraction, dynamics and playfulness. The buffer space behaves as a wood opening, being created from a three dimensional matrix of vertically moving wooden sound tubes.

The phenomenon as a whole can only be seen in our mind, mainly as a play of light and shadows while moving in space.

The sunshine is reflected on the light, glossy floor and illuminates the entire structure from beneath.
Outdoor there would be a pipe structure, functioning as a ‘curtain’, in which water is circulated with air bells.

Light sources are built into the wooden sound tubes as stars in the sky.

The wooden installation in itself is like a musical instrument, tubes are sound-boxes.

AFTERLIFE OF THE ARCHITECTURAL INSTALLATION

The appearing elements in the exhibition space constitute a harmonic unity in them, embodying the phenomenon that is created through the structur, it raises the opportunity of open-air exhibition with the moving light-sound-space, as a synthesis of nature. 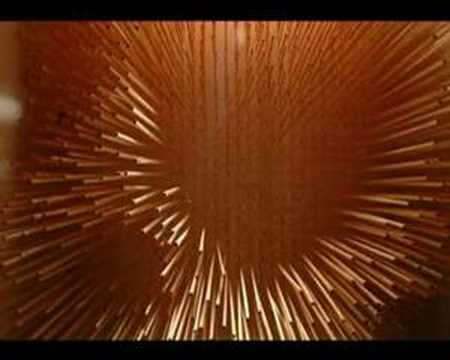